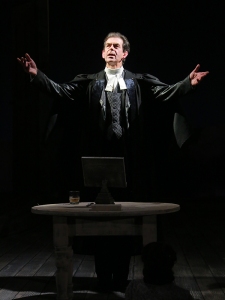 Today is the day I mark, as Dylan Thomas might have put it, my 60th year to heaven, so it seems an appropriate time to resume this much neglected blog. As it happens, the exigencies of schedules mean that Judith and I have already celebrated my unbirthday last weekend, with a trip south that included the essential Pitlochry experience: seeing two different plays on the same day with the same cast.

Now I’m sure that for many people the name ‘Pitlochry Festival Theatre’ conjures up an image of a theatrical world that is self-consciously conservative, safe and bland. In the past, that could at times be true. Ten years ago we saw a production of WS Gilbert’s ‘Engaged’ at Pitlochry which nudged the audience so often that you’d have thought the director was Eric Idle in Python persona. It was as if the production was making a point that this play was creaky and old-fashioned, but wasn’t that fun? Particularly uncomfortable were the crassly caricatured portrayals of Gilbert’s already stereotyped Scottish characters.

On the face of it, our choice of plays last week might have served only to confirm that this historic impression was still valid. What could James Bridie and JM Barrie possibly offer contemporary audiences beyond a certain curiosity value, or a measure of nostalgia for the days of the ‘well-made’ play? That was, in fact, my reason for wanting to see them—how would they sit in the company of such modern equivalents, in the Pitlochry season, as Stephen Greenhorn’s classic ‘Passing Places’ or Liz Lochhead’s ‘Perfect Days’? The result was a very pleasant surprise—we found both plays thoroughly gripping from beginning to end, helped in no small measure by direction, and acting, which played them absolutely straight, with not a hint of a collusive wink to the audience. The humour in them was the humour put there by the writers, not a modern gloss by the director. Certainly, both productions were among the most satisfying theatrical experiences we’ve had in a long time.

In fact, Barrie’s ‘The Admirable Crichton’ has received almost uniform critical praise for both play and production, with several writers noting how it is a necessary corrective to the current culture of ‘Downton Abbey’ rose-tinted sentimentality. I’d only add that it’s nothing like the anodyne Kenneth More film version, and that it’s always good to be reminded of how acid and dark a writer Barrie could be. After all, one of his early novels, ‘Better Dead’, was based on the premise of bumping off prominent figures in society to make room for new blood. But I was surprised that many critics, while praising the production of ‘Mr Bolfry’, wrote the play itself off as outdated and with little to say to a contemporary audience. Really? This is a play, set during a war, which confronts the dualities of faith and reason, doubt and certainty, societal norms and individual freedoms. How can that not be resonant? One only needs to imagine a production in Tehran, Baghdad or Jerusalem to discard any idea of the play being irrelevant. But, even close to home, it seems that those metropolitan critics need to get out more, and discover more of the hold which the Free Church still has in some quarters of the Highlands and Islands, or, much more alarmingly, the current resurgence of extreme evangelism in some rural communities in Wales.

The last time—the only other time—I’d seen a James Bridie play was in 1976, when the Royal Lyceum staged ‘The Anatomist’, based on the Burke and Hare story. Now that was creaky, the whole production being built around Tom Fleming’s star turn as Dr Knox. But this production of ‘Mr Bolfry’ was a different matter altogether: a truly ensemble cast which could readily absorb Dougal Lee’s rip-roaring turn as the devilish Bolfry, an imaginative set, and a production which took great care in getting the period detail right, without swamping the play in nostalgia. A large matinee audience sat with intent concentration throughout, with barely a smothered cough, and not a snore, to be heard. Bridie delights in intellectual argument, but those arguments arise out of his individual characters, who are not simply mouthpieces for Bride himself. And the play comes to no easy conclusion—unlike the plays of some of Bridie’s more polemical modern day counterparts, such as David Hare—but ends, instead, like ‘The Admirable Crichton’, on an uneasily unresolved note, leaving the audience to come to their own conclusions.

This is the month of the second ‘Luminate’, set up by Creative Scotland to be Scotland’s ‘creative ageing festival’. I suppose, as I enter my seventh decade, I should be taking an interest in such an event, but the concept of ‘creative ageing’ is as abhorrent to me as SAGA holidays or adverts for stair lifts. In fact, I think there’s a paradox at work here. Even while an initiative like ‘Luminate’ is seeking to promote and showcase the ‘growing evidence of the importance of creative activities to our wellbeing as we age’, there’s widespread concern about ‘ageing’ audiences for the ‘mainstream’ arts. Well, it’s true that, even on the verge of 60, I was in the youngest 5% of the audience for those Pitlochry plays, but the important point is that they were very well attended. A mid-week matinee at the start of October was more than two-thirds full, while the evening performance was almost sold out. And, as I’ve implied, these large audiences were for plays that offered plenty to think and talk about afterwards. But you won’t find Pitlochry Festival Theatre in the ‘Luminate’ programme.

Anyway, I’ve a suspicion that the anxiety about ageing audiences is often misplaced. The following night we were at a sold-out performance in the Usher Hall by the RSNO, and the age range present was pretty well comprehensive, even in the more expensive stalls seats. Up in the Gallery, there were many young people. And this was for no lightweight programme with big name soloists. The orchestra’s own outstanding lead cellist played the Elgar Concerto superbly, and the second half was taken up with Bruckner’s mighty 7th Symphony. The same spread of ages then was evident at a truly exceptional concert the following evening in St Giles, given by the Vox Coelestis choir. Again, no obvious favourites in the highly imaginative programme.

I suppose I worry about fragmentation. About concentrating on the benefits for older people (or children, for that matter) of participating in the arts, when we ought to be shouting about how everyone can benefit from such participation. About implying that some kinds of participation are ‘better’ or more appropriate than others—taking part in a dance class rather than going to Pitlochry Festival Theatre, for example. Though to be fair, the Luminate programme is so broad church that you wonder about the criteria for inclusion. Once we start talking about ‘Arts for older people’, or ‘Arts for young people’, or for those with special needs, or from minority ethnic backgrounds, we both start to erect unnecessary barriers, and we imply a certain benign paternalism, a conferring of benefits ‘de haut en bas’ that makes me feel rather queasy. James Bridie, were he still around, could write a great play about it. After all, his son did go on to head up the Scottish Arts Council!