The Problem with Poussin 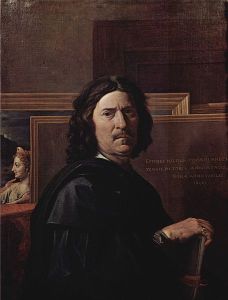 Living in the Highlands, there’s very little that we miss about the Central Belt, except for the chance to see major art exhibitions.  The team at Inverness Museum and Gallery often achieve wonders with their limited resources, but that doesn’t remove the need for a regular fix—usually in Edinburgh, as Glasgow has fallen badly behind ever since the magnificent MacLellan Galleries were mothballed.

One of the early tasks I was given on joining HI~Arts in 1994 was to write the brief for the very first formal feasibility study into creating a major gallery for the Highlands and Islands.  I used to hope then that I’d see such a gallery open before I retired.  Now it’s only the shifting ages for claiming the state pension, and the poor state of my personal pension, that are keeping that possibility even remotely open.

In the meantime Edinburgh can still offer some fantastic exhibition experiences, especially through the National Galleries and Museums.  We always make sure we get down for the Festival exhibitions, so we were initially disappointed that, having to be in Edinburgh for a meeting last week, we were just too early for most of those blockbusters. But that turned out to be a blessing in disguise.

In the first instance, this encouraged us to visit the kind of lesser display that can so easily get overlooked when the great crowd-pullers are open, Through American Eyes: Frederic Church and the Landscape Oil Sketch . Not the most stimulating of titles, perhaps, but this proved to be the kind of small but perfectly formed exhibition which, in just one room and some 25 small pictures, can be both a revelation and a source of intense pleasure.  Frederic Church is known here (insofar as he’s known at all, that is), for the Scottish National Gallery’s epic Niagara Falls from the American Side  but this exhibition showed his miniature side, and what an incredible eye and technique he had.  The exhibition is on till April next year, so you’ve no excuse if you miss it! And it’s free!

And better still, on the way to see the Church exhibition, we stepped into the little hexagonal room on the ground floor of the National Gallery that is the permanent home for seven of the greatest paintings ever created—perhaps the greatest paintings in any collection in Scotland:  Nicolas Poussin’s Seven Sacraments.  Now I’ve known these paintings all my adult life, and had we been trying to fit in various exhausting major exhibitions on this trip, we’d hardly have spared the time to revisit them, which would have been a shame, as I found the experience very moving.

How can I persuade you of the true greatness of these paintings?  It’s not an easy task.  Unless you’re a fairly well briefed member of the Catholic Church, the subject matter is obscure, not to say recondite, and not immediately easy to relate to.  Then, the paintings are now mostly very dark, due presumably to aging varnish and a certain amount of fading pigments, and so don’t make an immediate impression on the viewer.  And, most significantly, these are supreme examples of French Classicism, contemporary with the plays of Racine, the music of Lully, and the first phase of building at Versailles—a style, a philosophy, a world, that are probably as far from contemporary taste as anything in the last half-millennium.

Even as an art history student I didn’t take readily to Poussin; in fact I think I graduated without really understanding his achievement.   I was put off by the solemnity of his religious subjects and, paradoxically, by the frivolity of many of his mythological themes. It took a lot of looking, and some great exhibitions, including the Scottish National Gallery’s own landmark Cezanne and Poussin of 1990, to change my mind.    And I clearly wasn’t alone in having this problem: researching this blog I was amused to find a 2009 Guardian article titled  ‘Arts snobs can keep Poussin’.

Well, maybe I am an art snob, but my admiration for Poussin now goes well beyond the intellectual or the academic.  I quite simply love his paintings, as profoundly as I love the music of Bach, or the poems of John Donne, to mention two other artists in other artforms who can be thought ‘difficult’.  Let’s return to the Sacraments, and look at just one of them, Holy Eucharist.

Poussin: The Sacrament of Holy Eucharist

Forget Leonardo, this is the ‘Last Supper’, not least because it makes such a concerted attempt to re-imagine the scene, starting with having the apostles, in a historically correct manner, reclining on couches on three sides of a table, rather than lined up all in a row.  Yet there are still hurdles to overcome. Historically correct the scene may be in one sense, but hardly for a bunch of Galilee fishermen in an ‘upper room’.  Christ at first sight seems too idealised, while too many of the apostles’ heads seem to have the rigidity of classical tragic masks.  But set that to one side: look at how naturally everyone is posed, and look especially at their reactions.  Jesus has obviously just announced ‘One of you will betray me’ and many of the apostles are caught literally with their mouths full, or with the next bite half way to their mouths.   It has the vivid immediacy of a film still, an effect enhanced by the astonishing lighting from the central (and again archaeologically correct) hanging lamp, and especially by the figure of Judas, slipping out to the left.

But these elements are easy to describe.  What’s much harder to convey is what makes Poussin really great—a pervasive and intense sense of human empathy that, curiously, is heightened, not diminished, by the classical manner, and a truly musical sense of form and structure.  Goethe called architecture ‘frozen music’ but I think the phrase could equally be applied to Poussin—after all one of his most famous paintings is A Dance to the Music of Time!

So, the only way to ‘get’ Poussin, I’d argue, is to look, look, and look again, and keep coming back. The rewards repay the effort.  And so the real problem with Poussin is that he demolishes two arguments that are increasingly gaining ground: that art should be easily (if not instantly) accessible, and that art, especially of this kind, is elitist and those who want to enjoy it should pay for their pleasure. Good art takes time, and that’s why galleries need to be free.  And why we need a really good one in the Highlands!

One response to “The Problem with Poussin”