Worshipped any good books lately?  I have.  And if ‘worshipped’ sounds a bit extreme, perhaps even sacrilegious, how else would you approach a book which has survived, largely intact, for 1300 years, including evading Viking raids, being taken on lengthy peregrinations across the North of England, and even, according to one popular legend, emerging unscathed from complete immersion in the North Sea?  I’m referring, of course, to the Lindisfarne Gospels, the centrepiece—until the end of September—of a superb exhibition in the Palace Green Library of the University of Durham.

We had taken a flat in Alnwick for the week, with a London-based friend who is an expert in museums management, and our main reason for being in the North East was to visit this exhibition. So on a day that can only be described as Mediterranean, we arrived in a Durham that can rarely, if ever,  have looked more sunny, exotic and welcoming. I felt some trepidation about this excursion.  How do you build an entire exhibition around a book of which, unavoidably, only one page can be seen at any one time?  Indeed, I understand that only two different pages of the Gospels in total are being displayed during the entire three month run of the exhibition.  I needn’t have worried. As we all agreed—including our museums specialist friend—this was a superb and unforgettable experience.

First of all, it was a model of visitor management.  We had booked timed tickets for 13.30.  Arriving a few minutes before our time, we could join the rest of our cohort seated in the sun, while cheery stewards encouraged us that ‘we’ll get you in shortly’.  With the same friendliness and courtesy we were gently ‘processed’ through the entrance stages but, once inside the exhibition proper, we were left to ourselves and could stay as long as we liked.  The results of all this attention to detail were that at no time did we feel crowded, or that we had to move along without allowing enough time for a particular display, and then, when we finally entered the inner sanctum that housed the Gospels, the three of us were able to view the book itself for as long as we wished, without a queue forming behind us.

All of which would have been of little benefit had the exhibition itself not been a triumph of the combined skills of curation, display and interpretation.  Unobtrusively, almost subliminally, we were given a very clear and integrated understanding of the political, historical, religious, social and artistic context for the Gospels.  We came to understand why the Gospels had been made, where they were made, when they were made, and how they were made.  We explored the fusion they represent of Celtic and Anglo-Saxon artistic forms, the world of the book in the so-called ‘Dark Ages’, and the tensions between the Celtic and Roman churches that formed the background to the book’s production.  Nothing was ‘dumbed down’—children were offered a host of ways of getting involved in a completely separate space, which also housed a meticulous account of how the book was physically produced.  I doubt if anything in the exhibition could have troubled a believer, but nor was there the slightest hint of sanctimoniousness.

Particularly impressive was the use of video technology.  In the ante-room to that which housed the actual Gospels there were two giant video displays drawing on images of every page in the Gospels, and blowing up the illuminated pages in sequence at a scale that left you breathless with wonder at the skill of Eadfrith, the monk and bishop who is credited with both copying and illuminating the Gospels.    Then, in the separate display at the end, there were several PCs where you could explore each page in similar detail at your leisure.

The third thing that impressed us was the range of people visiting the exhibition.  Folk in the North East are very proud of the Gospels, and that was demonstrated by the diversity of ages and social backgrounds of those going round the exhibition with us.  This was a popular exhibition, without needing to be populist.  I understand there is a campaign to locate the Gospels permanently in the North East, resisted by the British Library.  It’s a campaign that deserves to succeed.

So, when I finally found myself standing in front of the book itself, able to view closely that one visible page, what did I feel?  Awe, of course.  Awe at its survival, at its incredible artistry and technical achievement, and awe also at the evidence it provides (as had the rest of the exhibition) of the richness of Northumbrian culture in the 8th century.  Pace Lord Howell, the North East was no more culturally ‘desolate’ 1300 years ago than it is today. 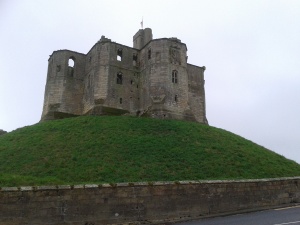 And awe, indeed, was what we felt throughout our week based in Alnwick—awe at the magnificence of Durham Cathedral (despite misguided attempts at modern and community art which threatened to diminish that glory), awe at the power and strength of the immense medieval  strongholds of Warkworth, Bamburgh and Alnwick, and at the 19th century industrial might that transformed all three of these great castles, and led to Lord Armstrong building the fantasy that is Cragside, awe even at the ambition that has led to the creation, in the last decade, of the wonder that is The Alnwick Garden.

And at all these locations we found hundreds, no, thousands of local people enjoying their heritage, often with a very well-informed perspective. At the Alnwick Garden we experienced a glimpse of the ‘peaceable kingdom’, as hundreds of families—and especially young children—experienced what I can only describe as ‘joy unconfined’ among the marvels that the Garden offers.

In many ways the Lindisfarne Gospels symbolise unity—embracing both Anglo-Saxon and Celtic artistic tropes, and also two languages and two scripts, thanks to the translation in Old English which the priest Aldred added to the text 250 years after Eadfrith’s work.  The Gospels speak of a time when Britain, no matter how fractured politically by warring kingdoms and Viking incursions, shared a culture of belief, literacy and artistic creation. Judith is a Geordie.  The Lindisfarne Gospels, and the architectural wonders of Northumberland, are part of the heritage she grew up with.  But I also feel they’re part of my heritage.  If independence comes next year, how will that change my feeling of a shared heritage?  I wish I could tell.